I Graduated! A New Journey Begins. 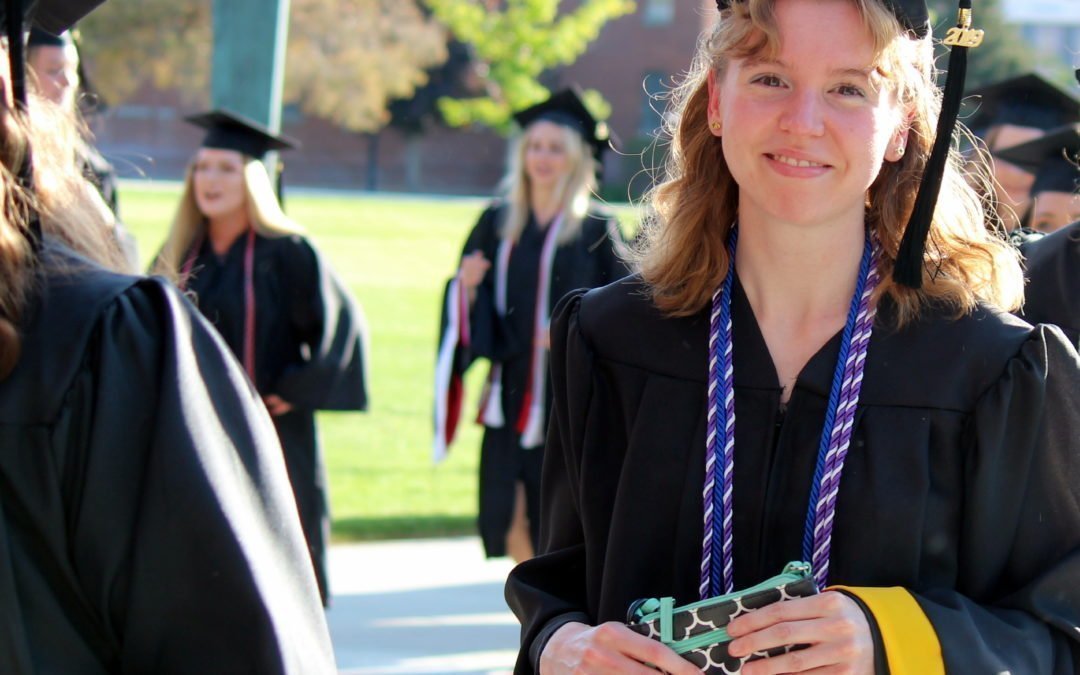 The title of this blog kind of gives away its entirety, so it kind of goes without saying that I successfully finished my degree. However, the events of the past four years have massively shaped me as both a human being and as a writer, so I think that this accomplishment warrants a blog unto itself.

I entered freshman year as most students do, with rose-colored lenses about this new adventure into studying something we hope to spend the rest of our lives doing. Little did I know that within a month, I would experience a major and permanent fallout with my roommate (not of my own making) that resulted in my living alone for the remainder of the year. Little did I know that within four months, I would fail a class – messing up my spring semester and requiring summer classes to catch up with the rest of my classmates. Little did I know that writing would consistently be put on the shelf because of homework loads more massive than I could have imagined, and the frustration of trying to move Flamerider forward when I barely had the stamina to keep up with my own very real homework and relational trials. My best friend of 12 years stopped talking to me after, at her own request, I offered advice and assistance for her own writing pursuits. Writing became something that was very lonely, yet I pursued it to not feel alone, for how can one feel alone when surrounded by one’s characters, who inevitably become one’s friends?

New year, new roommate – and a great one, at that. Homework piled on higher than ever, and writing was an afterthought. The loss of our oldest cat left a deep mark on my soul, and much of the year was spent surviving the constant onslaught of assignments and noise from the multitude of wing-mates in our cramped dormitory. January brought the so-called “Snowmaggedon” that most non-Idahoans laughed at; of course, they hadn’t needed to hike across 17 layers of snow and ice at 7:45 am to attend lab (after 10 minutes of post-holing across campus in -6 degrees Fahrenheit, my eyeballs hurt!). Exhaustion and stress that February led to a one-week confinement at home with the flu and the discovery that slowing down – willingly or not – allows ideas to take shape that couldn’t have before. The weeks following my recovery and getting back on the mega-horse of homework included a bunny trail I did not expect: a new character. The more I mulled over him, the more he took shape. Within a month, I knew his character arc over the entirety of Faeland Legends and the framework for the culture he came from. Out of the bitter cold of winter came a new branch of a world I was just beginning to understand, a world of my own making.

New year, same roommate – plus another. In a weird, old dorm/apartment with a fishbowl feel, I plodded forward with my studies. For sanity’s sake, I kick-started most weekends by a Friday night of writing. Flamerider began to form more fully, and the more I stayed in touch with my story, the more I began to see the big picture. I managed to dodge the flu while my peers dropped like flies but bit the class-failure bullet a second time. Taking 18 credits both semesters taught me the necessity of not just time management, but priority management. I began to form connections with my fellow engineering students – after making it half-way, we weren’t about to give up now. Even then, the intensity of spring semester classes left me reconsidering my choice of degree several times a week, if not several times a day. But if the workload wasn’t enough, the would-be relief of entering summer classes was drowned by the loss our dog. As much as I wanted to grieve his death, I had to catch up on two weeks’ worth of work in one to keep pace with the class – and then get ahead so I wouldn’t have to study during an upcoming trip. I buried myself – and my emotions – in my studies.

New year, back to one roommate – the great one. Living in an apartment made life far more pleasant, even though it required sprinting across a busy street to the main campus multiple times a day. I became the secretary of two engineering clubs and managed to not completely lose my mind contending with our newest engineering professor. Having only 12 credits meant I could consider campus jobs, and I had to – money was running tighter than ever. I worked two jobs a semester, and Christmas break was no break at all: I spent two weeks studying for the Fundamentals of Engineering exam (which we had to take in order to graduate), took it on December 28th, and found out I passed on January 2nd. We celebrated by watching “The Lord of the Rings”, but the rest of break was spent packing – we were going to sell our house. The last week of February, two of my closest friends to help us move boxes in a mix of snow and sunlight. With half as much space to work with, we sold and left behind many pieces of furniture and home-owning related tools. Months later, we’re still figuring out where things ended up and wondering how on Earth we still own books after donating almost 300 of them. Offloading, though, has made me far more comfortable with evaluating my possessions, as well as with changing scenery; more than likely, engineering will take me outside of Idaho, an idea I was once reluctant to consider.

Senior year taught me grit and perseverance more than any other year. I also solidified some incredible friendships that would not have formed anywhere else. I have been transformed into a far more critical thinker, diligent worker, and deeper writer than I could have imagined. I have not just learned engineering, but what it takes to achieve big goals, forge lasting friendships, and contend with the complex world we live in. This is what attending university is meant to do. Despite the many trials it presented, I am glad to have completed that marathon. Yes, I graduated from college, but I also graduated from adolescence. Though I don’t know what the future holds, I am more equipped to handle it and am excited to see where it leads.